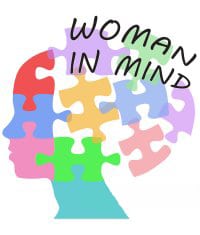 First, an ‘isn’t’. It isn’t one of Alan Ayckbourn’s greatest masterpieces. There are many of his works that are masterpieces, but this, as a piece of writing, falls a bit short of his usual high quality and just doesn’t span well or sit right with me.

What it is is a play about a woman who has mental health issues bordering on the hallucinogenic and schizophrenic. Her real life is a tad dull, but has its moments, and her fantasy life is, well, like living in something akin to a Noel Coward play – if Aldi did Noel Coward plays….

What it also is is well performed and directed.

The ‘woman’ in question (Susan) is on the stage for the entirety of the play. This requires someone who can hold a play together, remember and perform a lot of lines and, in this case, be more than one person in the same body. Rachael de Courcy Beamish is most definitely such an actress and she keeps the play moving along very nicely and gives a highly creditable and watchable performance.

Her ‘real’ world is populated by her clergyman husband, his sister, a doctor and, latterly, her son. As the husband, Gerald, Jeremy Austin’s delivery can only be described as the sort of delivery you’d get from chatting with a really intelligent and easy-going fella in a gentleman’s club. I loved it and could have watched him all night.

As the sister-in-law, Muriel, Kelly-Anne Singleton is a burst of energy and light as she commands the stage for every moment she speaks. Looking like a cross between Caroline Aherne’s ‘Mrs Merton’ and Julie Walters’s ‘Mrs Overall’, she was a star of the evening for me. The doctor is played by Chris Huggill, who gives a very good stab at a role which includes some difficult-to-learn lines. The son (Rick) is a very small part, but Aidan Alexander has some lovely moments, particularly in the early duologue with his mother.

Now for the ‘fantasy’ family. Starting out in the Noel Coward-esque style I referred to earlier, the husband, Andy, played by Adam Stoddart, is initially charming, lovely and seduction personified but, as the ‘mind’ part that he is meant to be, becomes delightfully sinister in the later part of the play. Nicely done. The daughter, Lucy, is also a delight to watch and hear. For a lot of the time, she is on stage with just the job of ‘being there’ on the periphery, and she does that well without stealing attention, but is also a little sinister because her facial attitude doesn’t change until she is referred to. Tiajna Amayo has great presence and a naturally well projected voice. I hope we see more of her. Finally, as the fantasy brother, Tony, whose job I think is to be irritating and in-your-face, David Vinter makes a welcome return to the BLTC stage.

The direction, from Andrew Whyatt, is, as becoming of a director of his wisdom and experience, very well thought out and presented. Maybe the fact that the play doesn’t span well, as I alluded to earlier, is the point of the play and, as this falls outside Andrew’s comfort zone, he is to be applauded for making it work.

The sound was a bit hit-and-miss. This is occasionally necessary, as we are seeing things through Susan’s eyes, but I don’t think that it was always on-point. The stage is good and lighting works well to denote times of day or entrances into or exits from Susan’s fantasy world.

Finally, an ‘isn’t’, I’m afraid. The programme tells me that it is set in ‘The Present’. It isn’t. It was set in the present when it was first presented, but that was in 1985, 32 years ago. I can’t see anything wrong with stating in the programme ‘Time – The Recent Past’ or, if it has definite overtones of the time, ‘The 1980s’ is perfectly acceptable.