My daughter, who helps manage a theatre in Wales, tells me that the atmosphere about the place is much more ‘buzzy’ when the current show is one that their own in-house creative team have staged, rather than one that has come in on tour. That buzz must be felt quite often at Salisbury Playhouse, who have a regular programme of their own productions, including this one and two more in the next three months. Worst Wedding Ever is actually a re-staging of a play first premiered at Salisbury in 2014. The author is Chris Chibnall, who since then has become much higher-profile with the success of his Broadchurch and his appointment as head writer and showrunner on Doctor Who.

Neither of those programmes is exactly a bundle of laughs, which Worst Wedding Ever is for the most part. A young couple, Rachel and Scott, are planning a modest wedding, but it is not going to happen if Rachel’s ghastly mother and sister succeed in their plans for a glitzy occasion with all the trimmings. Act 1 is mostly about their efforts to change her mind, while act 2 shows the results of those efforts and also features a radical change of tone which takes the play to a deeper level than just a farcical comedy. 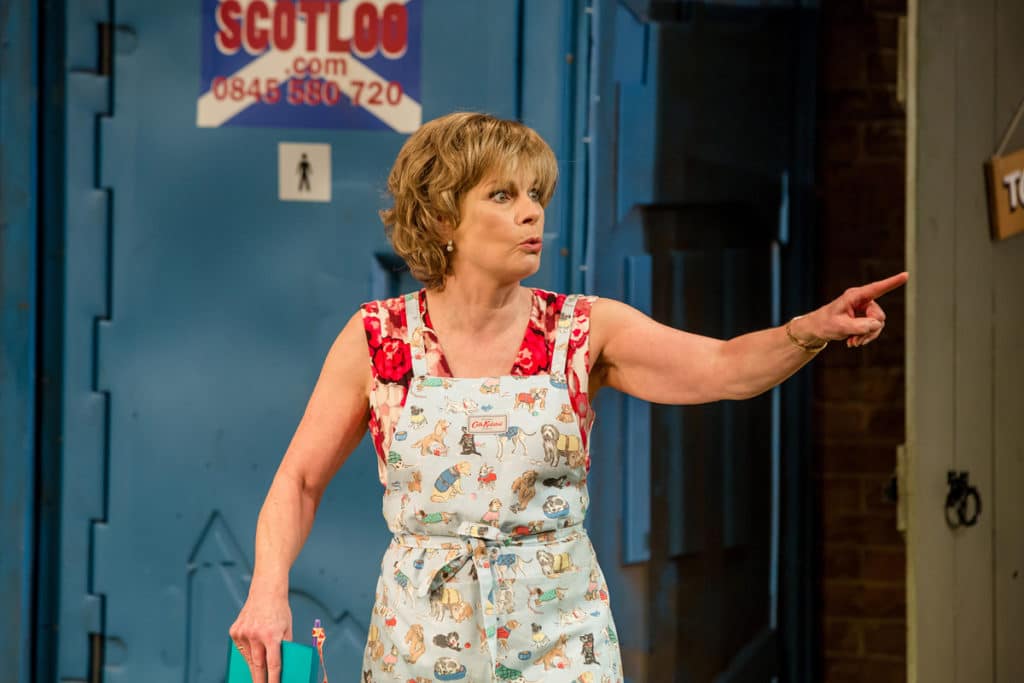 Photo Credit: The Other Richard

Liz, the mother, played by Julia Hills, is a blackmailing monster who knows how to exploit every daughter’s guilt: ‘You’ve destroyed my dream and I totally respect that’ is one of her lines. Elizabeth Cadwallader is the sister, Alison, whose tartiness is only a sign of a desperate need to be loved. Mel, Rachel’s father, seems comparatively normal but is equally capable of irrational behaviour and    Derek Frood captures his mood swings well. There is a good cameo from Ben Callon as Rachel’s eccentric and feckless brother, while Lloyd Gorman not only plays Alison’s about-to-be-ex-husband but is also one of the three onstage musicians. Kieran Hill is a vicar with a desperate desire to be ‘relevant’.

Amid this madhouse, the happy couple – ‘happy’ is the wrong adjective if the play’s many cynical comments on marriage are taken at face value – are played by Elisabeth Hopper and Nav Sidhu. The latter is convincing as a character so vulnerable that he has tried counselling, mindfulness and breathing exercises, and he spends most of the play completely bewildered. Elisabeth Hopper gives the stand-out performance, not only because her character is so much more likeable than anyone else but because she can hold an audience with the strength of her delivery. One warms to her as she describes her dream wedding in act 1, and the change of tone in act 2 is largely in her hands; she makes as good a job of it as anyone could.

Therein lies one of the play’s weakness. To give what is a knockabout comedy for 80% of its length a sudden and sombre twist is an incredibly difficult trick to bring off, and this play doesn’t bring it off, especially as elements of the comedy then re-emerge. The other weakness is that apart from Rachel and Scott, the rest of the family are deeply unpleasant people. Perhaps it is naïve to want to like the characters, but even (or especially) in a comedy, one has to be interested enough to want to know what’s going to happen to them, and that is difficult if they are the sort of people you would cross the road to avoid.

But Worst Wedding Ever is full of good jokes and clever slapstick. Don’t over-think it and it will provide a thoroughly enjoyable evening.