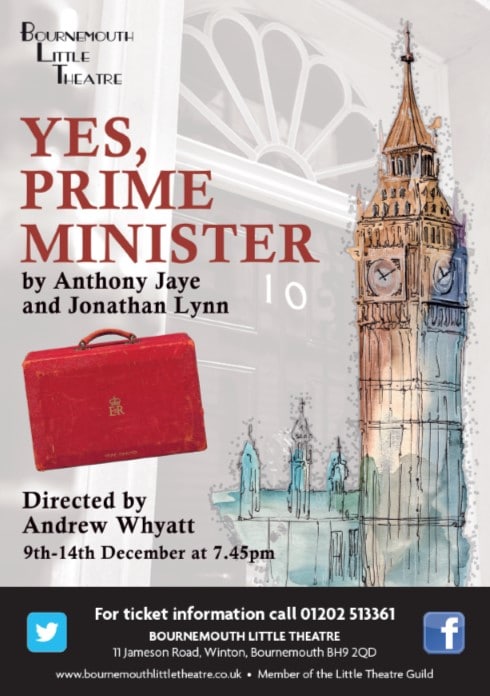 It was my very first visit to the ‘little’ theatre in Bournemouth and on a dark, cold night I very much looked forward to Bournemouth Little Theatre’s interpretation of the television classic Yes, Prime Minister.

What a topical production; although with the changing political landscape across the country I am sure that Bournemouth Little Theatre did not plan for its production to fall in such a week but the virtually sold out performance was testimony to both the popularity of the TV programme, made famous by the likes of Paul Eddington, and to the group.

I am a strong believer that to do justice to a well know television programme and translate that positively into amateur theatre you have to be bang on the money and this isn’t an easy task, particularly with this subject matter. The staging looked dated, perhaps that is what the production team were after, but I was confused as the set did not match with the modern day costume and Apple watch that one of the characters wore and referred to.

The script is not the strongest and because of that at times it felt laboured which was a shame as it was very clear a lot of work had gone into learning the lines and characterisation.

There were stand out performances from Lee Tilson as Simon Chester and Ryan England as the put upon Private Secretary to the Prime Minister, Bernard Woolley. There was also a nice performance from Bob Rankin as Sir Humphrey Appleby who had excellent characterisation, timing and tried his very best to drive the performance forward when he was in a scene.

Some of the props really did give the feel of how I would imagine Chequers to be like and that created a good atmosphere as you went into the theatre.

I cannot fault the cast, however this one was not for me but I left looking forward to visiting again one day to see a different production as I know that the reputation of the group is high. From spending some time in the bar after the show it was clear that I can look forward to seeing something special.